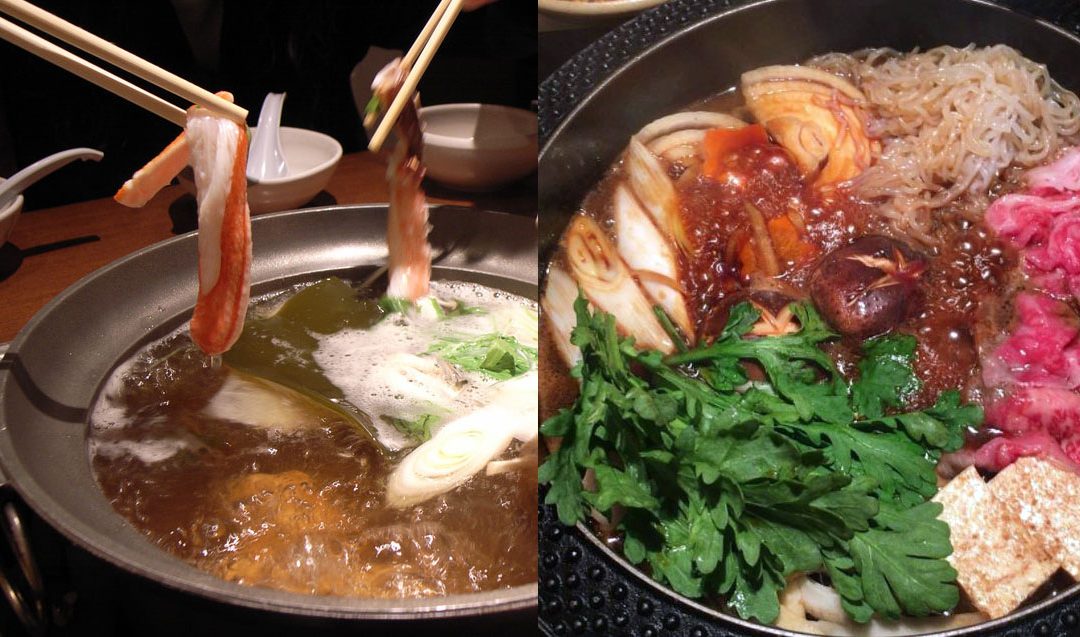 What are shabu-shabu & sukiyaki?

Both shabu-shabu and sukiyaki are traditional Japanese dishes served in the nabemono (Japanese hot pot) style.  They both contain thin slices of meat and vegetables that are cooked tableside in a pot with hot liquid.  Since they generally contain lean meats and clear broth, both are also known to be relatively healthy dishes.  So, what’s the difference?

Well, Shabu-shabu requires paper-thin slices of meat and vegetables so they can cook quickly one piece at a time by dipping briefly in a hot pot of water or broth.  The cooked meat and vegetables are then dipped in various sauces (e.g. ponzu sauce or sesame seed sauce) and eaten with a bowl of steamed rice. It has a predominantly savory flavor and is commonly eaten year round.

Sukiyaki, on the other hand, has slightly heartier slices of meat and vegetables.  The ingredients are cooked together in a simmering pot of soy sauce, mirin and sugar.  The cooked meat and vegetables are usually dipped in a bowl of raw beaten eggs before eating.  It has a sweeter flavor and is typically eaten during the winter season.

Besides Japan itself, both shabu-shabu and sukiyaki can be found in most Japanese neighborhoods throughout the US.  Here are some locations where you can find both shabu-shabu & sukiyaki so you can compare them yourself:

Keep in mind that since sukiyaki is typically a winter dish, it may only be served seasonally.  So, if you intend to order sukiyaki, you may want to contact these places ahead of time before you trek over there.  Enjoy your Japanese hot pot adventure!