Celebrity-owned restaurants: eateries and bars backed by your favorite stars 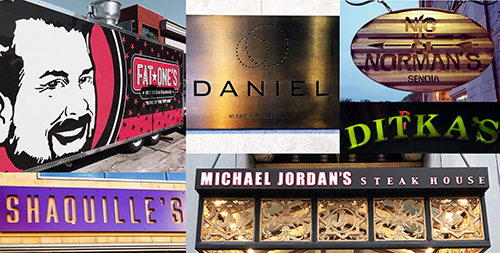 What are they? | Where can I find them?

What exactly are celebrity-owned restaurants?

Celebrity-owned restaurants are restaurants (or any type of food or drink establishment) that are either partially or wholly owned by a famous person.  These celebrities are most often some form of entertainer, athlete or food personality with a special love for food.  Many times they partner up with family members or friends in the restaurant business.

Celebrities who own restaurants sometimes use their fame and public recognition to help bring additional attention to the restaurant.  Other times, celebrities may simply want to invest in the restaurant and not want to get involved with the marketing.

In either case, the celebrity-owned restaurants that perform well do so because of the quality of their food, not just the name(s) behind it.  (Remember Planet Hollywood? Although it was backed by a handful of celebrities, it has gone bankrupt multiple times.)  Usually, having a big name associated with a restaurant helps with the initial marketing of the restaurant to create extra buzz, but in the end, returning patrons expect to be “wowed” by the full experience…especially the food.

Here’s a quick and dirty list of celebrities who currently own or have owned restaurants in the past:

(Disclaimer: This is far from a complete list.  Some of these celebrities may own dozens of restaurants that deserve their own articles…especially the chefs.  Also, restaurants are constantly opening and closing and ownership can change.  If you plan to visit any of these, make sure to look them up first to see if they are still up and running.)

Where can I find them?

You can find celebrity-owned restaurants across the globe and especially in the celebrities’ hometowns.  However, they are most highly concentrated in major cities like Los Angeles and New York.  Here is a short list of some of the best restaurants worth visiting that just happen to be owned by some very well-known people.

Meditation for Digestion: tap into the mind-gut connection

You are likely well aware that meditation can help reduce stress. However, did you know that it can also lead to a healthy stomach …
Read More

The Ultimate Travel Food Guide: a reference for food terms

This is an easy-to-access guide for the most common food terms for cuisines across the globe. If you’re an avid traveler or simply like …
Read More

Types of Eaters: Which one are you really?

Ever stop to think about what kind of eater you are?  Now, we’re not talking about if you’re a big eater, fast eater, emotional eater, …
Read More

What are they?  |  Where can I learn more? What are food words?  Food words are words that are related to food and eating (not the names of …
Read More

Father’s Day Charcuterie Board: a sincere form of plattery