Food Cart Restaurants: where foods of all cuisines come to you…dim sum style 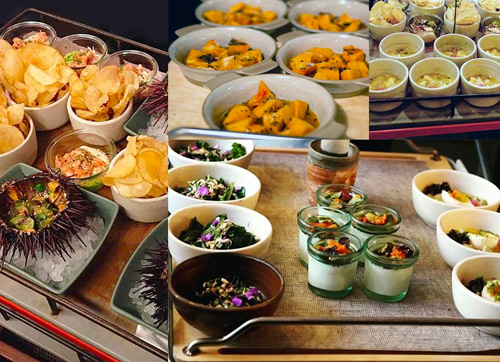 What are food cart restaurants?

Food cart restaurants are eating establishments that use small push carts to serve their ready-to-eat foods directly to their guests.  These serving carts or trolleys come out the kitchen filled with dozens of small plates of food and make their way to each table.

Think of it like a buffet, an endless array of food available in tapas-sized portions.  But instead of walking up to the food at stationary stations, the food is delivered to you on push carts.  Also, the cost is usually not all-you-can-eat, but per plate.  Guests stay seated at their tables and simply point at whatever dishes they would like to eat.  Then, those dishes are immediately placed on their table to be eaten.

There is virtually no time spent waiting for your food to be prepared (unless they run out of a specific dish and have to make more).  Due to the instantaneous nature of this style of food service, some restaurants opt not to have full menus.  This provides a more serendipitous feel.  In either case, the kitchen is often provided more liberty to cook on a whim.

History of Serving Carts in Restaurants

Dim sum has technically existed for over 2,500 years.  In the early 20th century, it was commonly served on trays.  Since the 1970s, places that specialized in dim sum would regularly use carts—usually heated by steam or stacked with bamboo steam containers to keep the food warm.  The ready-to-serve dishes were carted around to each table where the diners would select what they want to eat and instantly served thereafter.

As of the early 2010s, this dim sum-style service has been prevalently implemented in places serving various non-Chinese cuisines—frequently referred to as “American dim sum.”  Some serving cart restaurants of yore like David Burke’s Primehouse in Chicago and The Church Key in Los Angeles have come and went, but not for their unique serving format.  Today, a fresh generation of food cart restaurants are pushing on.

Where can I find them?

Restaurants that employ food cart service span across country, primarily in large diverse cities.  Here are a handful of the most lauded restaurants to serve their guests “a la carte.”