Crazy Drink Containers: Cups are out. Baby bottles and drink floaties are in. 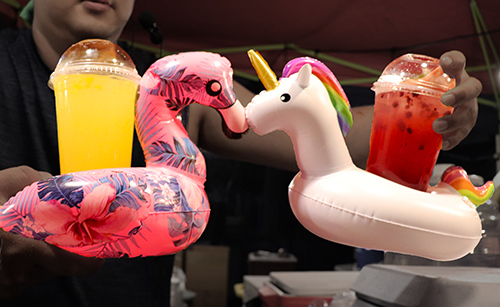 This popular drink trend, using unusual drink containers, is constantly growing and evolving due to no shortage of business owners’ creativity. It’s led by a deluge of giant baby bottles, floating drink holders and other uncommon drink vessels.

What kinds are there? | Where can I get them?

What is a crazy drink container?

Crazy drink containers are pretty much self-explanatory.  They are drink containers or holders that are not your average cups and drink holders.  Now, we’re not just talking about coconuts at a tropical resort, or mason jars at your local hipster joint.  These containers range from the cute & creative to the weird and bizarre.

Examples of these unusual beverage containers include:

When did this drink trend start?

It’s difficult to pinpoint the origin of crazy drink containers since people have been drinking out of all kinds of containers like shells, stones, or their own cupped hands since the beginning of human existence.   Vikings have drunk out of animal horns since c. 500 BCE.  Germans have been drinking from das boot since the early 19th century.  Tiki mugs and volcano bowls have been in American tiki bars since the mid-20th century.  Bennihana made drinking out of unique ceramic mugs like cats and Buddhas a dining ritual since the 1970s.  Plus, many tourist cities known for imbibing, like Las Vegas and New Orleans, have had collectible drink containers in many of their bars for decades.

This most recent wave of creative containers, however, can be attributed to the widespread fervor of mason jars around 2014.  These nostalgic yet versatile containers became ubiquitous, appearing in every eatery and bar appealing to the trendy crowd.  Now, they are the trite grandfather of this latest wave of drink containers.  It’s worth noting that Dominique Ansel (the inventor of the cronut) also invented the first cookie shot in 2014, further bolstering the crazy container trend.

How did it become a craze?

Out of the ordinary drink containers like these have become popular mostly because they’re “Instagrammable.”  These eye-catching vessels make people naturally want to share it on their social media.  They are often sold by vendors at various outdoor festivals and events . Also, many places provide free refills with their reusable drink containers and holders so people are more willing to buy them (like that ol’ giant theme park mug collecting dust in your cupboard).

Now, especially in the era of social distancing, these drink containers aren’t limited to large events. People frequently look for unusual things to drink out of for their own events and parties to delight their guests. Also, they can still be found at many bars and eateries.

You can usually find different types of crazy drink containers at annual fairs, night markets and large farmer’s markets like NYC’s and LA’s Smorgasburg.  There are also certain trendy and themed eateries and bars that serve drinks in unique containers as well.  Some places you’ll want to check out include…