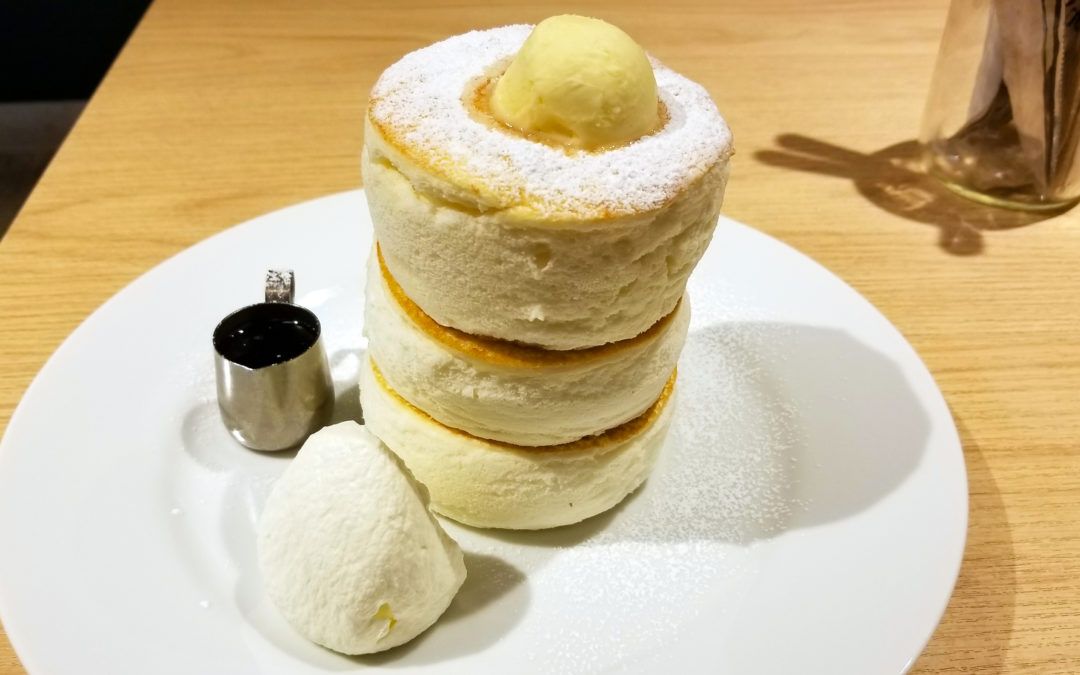 What are Japanese soufflé pancakes?

These airy, yet blubbery breakfast pancakes were popularized by Gram Cafe & Pancake which opened their first location in Osaka in April 2014.  Now they are available in Gram Cafe & Pancake’s 50+ restaurants and other establishments all over Japan, Asia and Europe.

Japanese soufflé pancakes are thicker and smaller in diameter than traditional American and European pancakes, or Japanese rice cooker hotcakes.

Naturally, the best place to get fluffy Japanese soufflé pancakes is in Japan.  Some of the most popular places include: Gram Cafe & Pancakes, Mee’s Pancake, House Made Pancake and Flippers.  If you happen to be in Japan, make sure to arrive early because some of these places only sell these soufflé pancakes in limited amounts.

As of 2018, a few locations in the US have started creating their own renditions of these incredibly light and spongy pancakes.  The fast-growing Japanese chain, Flippers, actually opened its first US location in New York in 2019.  Here are other locations where you can taste these unique Japanese style pancakes for yourself…

Looking for more places that serve super soft and fluffy Japanese soufflé pancakes?  Although they can be hard to come by, you can find the latest list of places on Glutto right here.

If there’s no way you can make it out to any of the locations that serve Japanese style pancakes, or you just want to try your hand at making them, here’s a recipe you can try it at home.  This is the absolute easiest way to make these airy pancakes and you can save this recipe on Glutto here.

Like Japanese food? Well, with all the Japanese restaurants you’ll be visiting in your lifetime, it would be worthwhile to learn some basic Japanese …
Read More

What is mochi? Mochi is a traditional Japanese dough made out of mochigome, a Japanese short-grain glutinous rice. It is used in many desserts and …
Read More

Mochi Ice Cream – melts in your mouth not in your hand

Ever wish you could just grab some ice cream and pop it in your mouth? If you have, then mochi ice cream was made …
Read More

Where can I get it?  |  How can I make it? What is omurice?  Omurice is a Japanese omelette served with rice and topped with ketchup or a sauce.   Its …
Read More

Father’s Day Charcuterie Board: a sincere form of plattery

Havarti cheese: it is not rotten in the state of Denmark

Manchego: what you must know about this Spanish cheese

Gorgonzola: the versatile Italian blue cheese with a tiny kick

Brie Cheese: get to know this essential soft French cheese

Burrata: an Italian cheese that literally bursts with goodness